To share your memory on the wall of Viola Bender, sign in using one of the following options:

Provide comfort for the family of Viola Bender with a meaningful gesture of sympathy.

Viola was born July 13, 1925 in La Grange, Indiana to Daniel and Martha Slabaugh; one of five children. She passed into eternal glory on April 15, 2019 at The Bridge in Alamosa, CO.

Viola was six weeks old when the family moved to Hartville, OH where they lived, played and worked for many years. At a young age she accepted Christ and loved and served Him all of her life.

On June 1, 1947, she married Claude Bender; they were married for 67 years and were blessed with six children: Cheryle Gingerich from Seattle, WA; Lowell Bender from Wellington, KS; Rebecca Bender from Alamosa, CO; Regina (Bob) Rice from Alamosa, CO; Nadine (Nathan) Kuehl from Windsor, CO and Myrna (Stan) Miller from Laramie, WY. She has 11 grandchildren and 7 great-grandchildren.

With a desire to help financially with the family’s expenses and to help and serve others, Viola made the decision to go to nursing school, but that required that she either had a high school diploma or a GED. Caring for her ailing mother when she was in high school prevented her from obtaining her high school diploma, so she set about working for her GED which she successfully completed in 1968. From 1969-1970, with 4 children still in the home (the oldest had married and moved away; one was away at college) she attended nursing school in La Junta, CO and accomplished her goal of becoming an LPN.

Church was always a vital part of Viola and Claude’s life and they participated as actively as their health would allow, attending First Christian Church in Alamosa. The Senior Center was also an important place as they grew older. Both Viola and Claude were active members at the Center in Alamosa. It was a place where they could socialize, get a good meal and participate in various events.
Viola and Claude both enjoyed traveling and nature. With six children they took vacations to California, Montana and numerous times to Indiana and Ohio where the extended family lived, a vacation of touring Colorado and the many beautiful areas available right here. Money was tight, so they traveled by car (usually a station wagon), camping out along the way with a cooler full of bread, lunch meat, vegetables and fruit; eating in a restaurant was a rare treat.

Viola was a person who genuinely loved and cared about people - she truly cared about them and each one felt that from her. No matter where she was, she would engage people in conversation with an earnest desire to get to know them. She maintained a positive attitude about most everything that came her way, up to and including her death, relying on her faith in God to supply strength, courage, wisdom or whatever was needed in any situation.

Friends and family were dearly important to her. Her family brought her the greatest joy and passing on to her children a love for the Lord and faith in Him was of utmost importance to her; she provided them with a powerful example in the life she lived.

A memorial service is planned for Saturday, April 20 at 11:00 AM at the First Christian Church on the corner of First St and State Ave.

Receive notifications about information and event scheduling for Viola

We encourage you to share your most beloved memories of Viola here, so that the family and other loved ones can always see it. You can upload cherished photographs, or share your favorite stories, and can even comment on those shared by others.

Posted Apr 26, 2019 at 09:41am
One of my favorite memories is when your mom was holding Travis almost 48 years ago, as she was helping us head home from the hospital. I will always remember our tea and cookie times, her encouragement in so many parts of my life. I could go on and on... She will be missed, Carolyn
Comment Share
Share via:
TS

Posted Apr 17, 2019 at 10:13am
To the Bender cousins -
How we wish we could be with you to celebrate and remember the life of a dear precious loved one. She holds a very special place in our hearts. “Thanks again, Aunt Vi!” Your family has been in our prayers so much these past months and will continue to be as you all gather this week and then make the adjustments of her homegoing. Love, Titus and Murna
Comment Share
Share via: 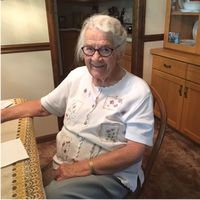