To share your memory on the wall of Lorenzo Trujillo, sign in using one of the following options:

Provide comfort for the family of Lorenzo Trujillo with a meaningful gesture of sympathy.

Lawrence, as he was known to most, was born on June 24, 1942 to Anselmo and Elionela (Arellano) Trujillo. He spent most of his life in Center and Alamosa but lived a few years in Casa Grande, Arizona. He worked in mining and agriculture.

Lawrence was rich in knowledge of family history and loved the great outdoors of the San Luis Valley where he hunted with family and fished with his best friends. He enjoyed his morning sweet treats with his neighbor. He liked to garden, take care of his yard and do woodwork. He was an avid Broncos fan.

He is survived by his wife of 45 years, Jill Trujillo of Alamosa; son Don Trujillo of Pueblo; daughters Connie (Geno Gowens) Trujillo and Lorena (Reno) Chacon of Center; stepdaughters Linda Hall of Alamosa, Heidi (Michael) Naranjo of Phoenix, Az and Leah Boss of Alabama. He is also survived by his grandchildren Jacob McClure of Alamosa, Dalton Trujillo and Briana Trujillo of Pueblo, Timothy (Elizabeth Rivera) Chacon of Center, Aron (Amanda) Martin of Alamosa; Michael Naranjo of Arizona, Bridget (TJ) York of Mesa, AZ; Eric Cicione of Alabama, Aubrey (Jeremy Wittig) Cicione of Mesa, AZ, Ryan Cicione of Korea; his great-grandchildren Noelle Trujillo, Jayden Padilla, Noah Marroquin, Jace Martin, Kade Martin and baby York that is on the way. He is also survived by his sisters Sobeida Moreno, Lucy Trujillo and Barbara Chaparro, all of Center and Tammy (Jeff) Schnedler of Canon City; his brothers Filemon (Mardell) Trujillo of Montrose, William (Sally) Trujillo of Monte Vista, Billy Trujillo and Wesley (Anita) Trujillo, of Center; and his good friend Tom Burrows of Alamosa. He leaves behind numerous nieces, nephews and other family members and friends.

Lawrence is preceded in death by his parents Anselmo and Elionela Trujillo, his siblings Catherine Trujillo, Bernice Garcia, Irvin Trujillo and Lee Trujillo as well as his beloved dog, Joy.

Visitations will be held Friday, January 3, 2020 from 5:00-7:00 pm at the Rogers Family Mortuary in Alamosa and Saturday morning, January 4th from 9:45-10:45 am at the Alamosa Fourth Ward of the Church of Jesus Christ of Latter-day Saints, 927 Weber Dr. in Alamosa. Funeral Services will follow at 11:00 a.m. at the same church. Interment will take place in the Alamosa Cemetery at the conclusion of the funeral services.

Rogers Family Mortuary is in care of the arrangements. To leave online condolences and remarks for Lawrence’s family, please visit www.RogersFunerals.com
Read Less

We encourage you to share your most beloved memories of Lorenzo here, so that the family and other loved ones can always see it. You can upload cherished photographs, or share your favorite stories, and can even comment on those shared by others.

Posted Jan 06, 2020 at 10:34am
Jill and family, My condolences to you. I will keep you in my prayers. I’m sorry I didn’t learn of his passing until this morning. Arnie, myself, Jill & Lawrence enjoyed a few great times together, now Arnie & Lawrence are free of the pain of this worldly plain. Jill I will call you and drop by to visit. Sue Gallegos
Comment Share
Share via:
DV

Posted Jan 02, 2020 at 07:00pm
I was lucky to meet Lawrence and Jill one time and got to spend 4 days and he invited us into their home. Tenlee just talked about him teaching her how to make tortillas with play dough just a couple of days ago. He was a great man.
Comment Share
Share via:
C

Posted Jan 01, 2020 at 11:37am
I hadn’t seen My cousin Lawrence in years, but he still left quite an impression on me. He was loved by many and will be missed by everyone who knew him.
Rest In Peace my lovely man and love to your family.
Your Cousin Carol Trujillo-Henson.
Comment Share
Share via:
KD 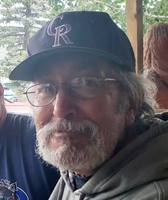