To share your memory on the wall of J. Lynn Shawcroft, sign in using one of the following options:

Provide comfort for the family of J. Lynn Shawcroft with a meaningful gesture of sympathy.

We encourage you to share your most beloved memories of J. Lynn Shawcroft here, so that the family and other loved ones can always see it. You can upload cherished photographs, or share your favorite stories, and can even comment on those shared by others.

Posted Oct 22, 2019 at 06:18pm
My wife and I met in Senor Shawcroft's Spanish class following our missions. He caught us holding hands under the desk one day and asked to meet with us after class. He told us he was a temple sealer and offered his services. Five months later we knelt at the alter in front of him with family and friends at our side. We enjoyed a trip to Guatemala in 1995 where we seemed to be one step behind he and Dorothea at three of the areas where they had served. We never did meet up with him there but enjoyed hearing the love that the people of Guatemala had for he and his wife. I have been blessed to maintain contact with him off and on through the years. We had hoped to meet up with him someday in the San Luis valley but our circumstances kept us from seeing him there. I will always treasure the phone call I had with him 5 years ago and the opportunity that I had to share with him my gratitude for the blessing of being sealed to my sweetheart for time and all eternity.
Comment Share
Share via: 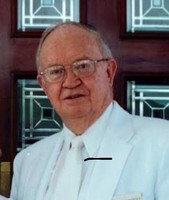