To share your memory on the wall of James McGuffin, sign in using one of the following options:

Provide comfort for the family of James McGuffin with a meaningful gesture of sympathy.

Cecil was born on June 5, 1931 in Encino, New Mexico, to Roy McGuffin and Eunice Perry McGuffin. He married Gladys Hostetter at her family home in La Jara in June of 1973. They enjoyed 43 years together.

Cecil was a very hard worker, often working from before the sun came up until after the sun came down. He honorably served his country in the United States Army and retired as a Master Sergeant. During his time in the Army, her served two tours in Vietnam and one in Korea and was awarded the Purple Heart. He enjoyed fishing, hunting, gardening and canning. Cecil was an active member of the Church of Jesus Christ of Latter-day Saints and he held many callings.

He was preceded in death by his parents, his wife, his son, Mark McGuffin as well as his siblings, Leroy McGuffin, Thelma McGuffin and Louise McGuffin.

A Visitation will be held from 4:00 pm to 6:00 pm Tuesday, March 26, 2019 at the Rogers Family Mortuary in Alamosa. A Graveside Service with Military Honors Service will be held 10:00 am on Wednesday at the Sanford Cemetery. Contributions are suggested in his memory to the Alamosa Fourth Ward Missionary Fund, in care of the church offices.

Rogers Family Mortuary of Alamosa is in care of the arrangements. To express condolences, please visit www.rogersfunerals.com
Read Less

Plant a Tree in Memory of James
Plant a tree 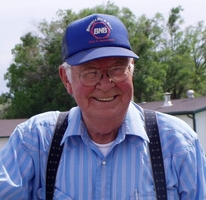