To share your memory on the wall of James Brown, sign in using one of the following options:

There will be a viewing Sunday, March 1, 2020 from 4:00 p.m. to 7:00 p.m. at Rogers Family Mortuary in Alamosa located at 205 State Avenue. The funeral will take place at 11:00 am on Monday, March 2, 2020 at Church of Jesus Christ of LDS Mormon Church at 927 Weber Drive, Alamosa, CO. Interment will follow services in the Sanford Cemetery. The family asks that you send flowers, gifts, and donations to Rogers Mortuary 205 State Avenue Alamosa, Colorado. Donations may be made to “The Disabled Veterans” in honor of James Russell Brown (Russ). To express condolences, please visit www.rogersfunerals.com

Posted Mar 14, 2020 at 01:56pm
I was so sad to hear about Russ. He and Nubbin were such good friends and now they both are gone. I heard so much about his family from Nubbin and his conversations. I know he will be missed so much by Jo Ann and his children.
Comment Share
Share via: 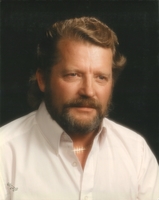