To share your memory on the wall of Harold Benson, sign in using one of the following options:

Print
Harold Lester Benson, a longtime resident of Del Norte passed away on September 20, 2020, in Louisville, Colorado from pneumonia. He was 91 years old.

Harold was born to Blanche Lenore Hilton and Harry Lester Benson on January 15, 1929, ... Read More
Harold Lester Benson, a longtime resident of Del Norte passed away on September 20, 2020, in Louisville, Colorado from pneumonia. He was 91 years old.

Harold was born to Blanche Lenore Hilton and Harry Lester Benson on January 15, 1929, in Del Norte, Colorado. He was the third generation of Bensons, following his father Harry and grandfather George who lived, worked the farm, and raised their children north of Del Norte. He worked hard as a boy and a young man helping on the 350-acre farm (Sunnyslope Farms) growing potatoes, garden peas, field peas, barley, oats, and alfalfa. He and his father also raised cattle, hogs, and sheep. Harold had two siblings -- a brother, Robert, and a sister, Viola, who both died as young children. He attended Del Norte High School, was a member of FFA, and played on the football team. He was also on the Student Council.

When Harold graduated from Del Norte High School in 1946, he was only 17. He was fearless in nature and wanted to see the world. He took off on a Greyhound bus and explored California for a year and a half, rented a room, and worked at a variety of jobs to pay for his room and board. Afterward, he spent some time attending CSU in Fort Collins before joining the Navy during the Korean war. He was stationed in Corpus Christi, where he met Carolyn Halstead while she was singing in the choir at church. He was then sent off to be stationed in Japan and was on the USS Electron. Six months before his four-year term was up, the armistice was signed and he was released. He had enjoyed flying and sailing the Pacific and was proud to have served his country.

Upon his release, he and Carolyn married July 10, 1954, in Corpus Christi. Their plans to live in Corpus Christi were changed abruptly when Harold’s dad became sick and passed away two months later, leaving Harold the responsibility of moving back to Del Norte with his new bride to help his mother and work the large farm.

Harold and Carolyn were happy together and raised four children in Del Norte. They also had a sheep farm for many years and he was well known around the San Luis Valley. In 1970, he went back to college at Adams State where he completed his Bachelor’s degree in teaching. He taught science, math and woodshop at Saguache High School for twenty years. He retired from teaching in 1992, but still continued to enjoy working the farm and tending sheep with his son, Scott. Harold and Carolyn enjoyed the outdoors, and loved taking their kids picnicking and camping. He enjoyed time spent outdoors fishing with his daughter, Lisa. On summer nights as they grew older, Harold and Carolyn could often be seen on their lawn chairs in front of their country home under a shared blanket, watching the stars and reminiscing of their lives together. They enjoyed many weekend getaway trips together and would frequently drive to northern Colorado to see Lisa and Chuck, Jon and Cyndi, and their six grandchildren.

Harold was an exceptional son, husband, father, and grandfather. He loved it when his grandsons and Jon would come to Del Norte to antelope hunt. He was also close to his daughter-in-law, Cyndi. Harold was proud of his grandchildren and each one of their professional and personal accomplishments. Three of them received degrees in 2020.

Harold wanted to be involved in family gatherings and was always ready to appreciate a good meal and express gratitude for his care. He also can be commended for taking wonderful care of his mother, showing her love and attention until 2010 when she died at 105 years old. He adored his two great-granddaughters, Emma and Tessa Benson. Losing his wife, Carolyn in 2014 was extremely hard for him. He was also preceded in death by his daughter, Cynthia in 1992 and his son, Scott in 2017. He experienced much loss in his life.

Harold and Carolyn attended the Pioneer United church in Del Norte, where he did many hours of wonderful service through the years for the church and for the community. When he prayed, we all knew he had a strong belief and faith in God and looked forward to eternal life.

A graveside service will be held at the Del Norte, Colorado cemetery on Saturday, October 3, 2020, at 2 p.m. Friends are invited to join in our social distancing service and are asked to please wear masks.

Our family wishes to express our gratitude to all the kindnesses that have been shown to the Harold Lester Benson family through the years.
Read Less

Receive notifications about information and event scheduling for Harold

We encourage you to share your most beloved memories of Harold here, so that the family and other loved ones can always see it. You can upload cherished photographs, or share your favorite stories, and can even comment on those shared by others.

Plant a Tree in Memory of Harold
Plant a tree 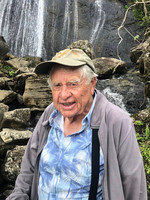