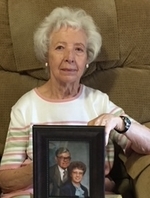 Wilma Jean Dady Riggenbach, 94, born July 31, 1926 in Oceanside, CA died peacefully in Thornton, CO on November 19, 2020 with her two daughters, Kay and Karen, at her side. She had additional cherished family members nearby at the window of her skilled nursing home, where she had resided since late August because of advanced Alzheimer’s.

Wilma’s parents, Walter and Leota Dady, who predeceased her, moved from California to the farming community of Center, Colorado when Wilma was a very young child, and she remained there throughout her school years, graduating from Center High School in 1944. She attended Colorado State University for a year, then returned to Center where she met her future husband, Harry F. Riggenbach, while working at Center’s First National Bank. They were married in 1948 and lived the majority of their 44 years together in Alamosa until Harry’s death in 1992. Wilma was a long-time member of the Alamosa Presbyterian Church and an employee of the Alamosa State Bank.

In addition to her daughters, Kay Riggenbach Ozanne (Hal) of Broomfield and Karen Riggenbach-Vaughn (Tom) of Denver, Wilma is survived by her two younger siblings, Gordon Lee Dady (Mae) of Lakewood and Eloise Dady Blevins of Alamosa. She was deeply loved by and is survived by four grandchildren, Michelle Jones of Lakewood, Mark Jones of Monte Vista, Connie Ozanne Avalos (Darin) of San Marcos, CA and Jason Vaughn of Denver as well as her great grandchildren, Kalen Jones and Haley Jones-Nelan, Tucker and Payton Jones and Cooper and Callie Avalos. Along with her immediate family, Wilma will lovingly be remembered by her many nephews and nieces and extended families, along with Shawna Jones, the mother of Tucker and Payton Jones.

Funeral arrangements are being handled by Rogers Family Mortuary. Because of Covid, the service will be limited to family. She will be interred in the Alamosa Cemetery with her husband. In her memory, contributions may be made to the Alamosa Presbyterian Church or the Alzheimer’s Association, Colorado Chapter. To express condolences, please visit www.rogersfunerals.com