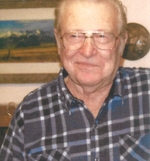 William John “Billy” McCoy, 85, passed away on November 26, 2020 in his home surrounded by his loving family and under hospice care.

Billy was born on June 18, 1935 in Del Norte, Colorado. He was the son of William Henry McCoy and Edna Louise Teem (McCoy, Plymale, Hicks). In addition to his parents, he was preceded in death by his brothers Eddie McCoy and Bobby McCoy.

In 1953, Billy graduated from Alamosa High School. He attended Adams State College in 1993-1994 taking courses in Art. Billy had a deep passion for art.

Billy farmed in Monte Vista for a few years, working for his in-laws. During this time, he was a member of archery clubs. He then moved to Alamosa with his family where he started building homes and formed Billy Mack Construction Company in the mid 60’s and early 70’s. He had a Polaris Snowmobile dealership, where family and friends enjoyed many trips. Billy also had a billboard and sign company, as well as a septic system company. He was proficient in leatherworking and enjoyed all aspects of making turquoise jewelry. As part of his construction ventures, Billy dug the trenches with his backhoe for the Adams State College buildings. He was a very accomplished backhoe operator.

Billy was a lifetime member of the B.P.O.E. 1297 Elks Lodge in Alamosa and enjoyed playing poker with his cousin Dixie and many friends. They played in Del Norte, Center, Hooper, and Blanca. He was also a member of the Rocky Mountain Artists of Alamosa and the Spanish Peaks Art Gallery of La Veta, CO. Billy truly enjoyed making sculptures, painting on many different mediums and working with clay. One of his greatest inspirations for his artwork was Rock Creek, the San Luis Valley and the beauty of the Colorado Mountains. It is hard to put into words what billy was. He was a loving father, mentor, devoted family man and everything he accomplished was inspiring.

Cremation has been chosen. Due to COVID-19, there will not be any viewing or service, however, his family will have a private gathering at a later date in Rock Creek. In lieu of flowers, contributions are suggested in his memory to Hospice Del Valle, 514 Main Street in Alamosa, CO 81101.

Rogers Family Mortuary is in care of the arrangements. To leave online remembrances and words of strength and comfort, please visit www.RogersFunerals.com