To share your memory on the wall of Virginia Kelly, sign in using one of the following options:

Print
Alamosa – Virginia Clair Kelly, 84, loving wife, mother, aunt, daughter, and sister, passed away peacefully to return to her Heavenly Father, at her home at the Bridge in Alamosa, CO on October 30th, 2020.

Virginia was born on May 30, ... Read More
Alamosa – Virginia Clair Kelly, 84, loving wife, mother, aunt, daughter, and sister, passed away peacefully to return to her Heavenly Father, at her home at the Bridge in Alamosa, CO on October 30th, 2020.

Virginia was born on May 30, 1936 in Manassa, CO to Martha McNamee Howes and June Allen Nielson. Virginia’s family moved around a lot and she attended several different schools in the San Luis Valley.
Eventually Virginia graduated from La Jara High School in 1952. After high school graduation Virginia attended school in Minneapolis, Minnesota and BYU in Provo, UT where she completed her degree to become a hospital laboratory technician. Virginia enjoyed working in the medical field in both the Del Norte and Alamosa Hospitals.

Virginia was united in marriage to John William Kelly on August 9, 1959 in Romeo, CO. At that time Virginia became a full time farm wife and mother. They were blessed with 3 children, Kimberly, Brad, and Celeste. They lived on the Kelly Farm 14 miles southwest of Alamosa where they raised their family. Virginia and John spent 35 years on the family farm where they were active in the community and Virginia taught 4-H cooking classes to many of the youth in the area. Also for many years, Virginia was known around the Valley as the “Corn Lady” for the sweet corn that they grew.

In 1987, after the children were on their own, Virginia and John spent their winters in Mesa, Arizona. During this time, Virginia enjoyed volunteering at the Mesa Historical Museum where she was a docent teaching others. She also enjoyed spending time with her grandchildren, attending the temple, traveling, and playing golf and card games. Virginia was known for her beautiful smile, her kind and compassionate personality and never saying a bad word about anyone.

Virginia had a deep faith in her Father in Heaven and Savior Jesus Christ. On September 27th, 2008, Virginia and John were sealed for time and all eternity in the Albuquerque, New Mexico Temple of the Church of Jesus Christ of Latter Day Saints. Virginia always wanted to serve her fellowman so it was a thrill for her to do her families’ work in the temple. Virginia and John celebrated their 60th wedding anniversary together in August of 2019.

Due to COVID restrictions, Virginia was laid to rest in a small graveside dedication on November 3rd, 2020 in the La Jara, CO cemetery. Virginia’s family is planning a Memorial Service for her at a later date for family and friends to honor her amazing life.

Rogers Family Mortuary in Alamosa is in care of the arrangements. To leave on-line condolences, tributes, or words of strength for the family, visit www.rogersfunerals.com
Read Less

Receive notifications about information and event scheduling for Virginia

We encourage you to share your most beloved memories of Virginia here, so that the family and other loved ones can always see it. You can upload cherished photographs, or share your favorite stories, and can even comment on those shared by others.

Plant a Tree in Memory of Virginia
Plant a tree 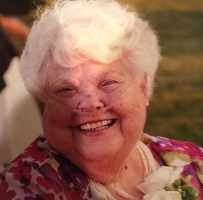