To share your memory on the wall of Steven Gunther, sign in using one of the following options:

Provide comfort for the family of Steven Gunther with a meaningful gesture of sympathy.

Print
Steven Lawrence Gunther (Gunz) passed away January 29, 2020 in San Acacio, Colorado surrounded by his loving family. He was born March 20, 1961 in Chicago, Illinois to Willard and Anne Weir Gunther.

He was raised in Chicago, Illinois and then moved to Long Island, New York where he lived for several years. In 1969 he and his family moved to Syracuse where his father was employed at Carrier Air Conditioning. In 1986 he moved to Colorado and began working in construction and starting a family. Steven enjoyed going to the mountains, camping, fishing, working on cars and looking at old cars, cruising the back roads and watching football. He also loved spending time in San Luis with his stepchildren, family and his many friends
.
Steven is survived by his children and stepchildren Marcos Gunther, Jade (Gabe) Muniz, Nicolette (Jacob) Manzanares, Angela (Jeremiah) Benton, Monica Medina, Mechelle Medina, Johnny (Sophia) Chavez, his brothers John Gunther, Richard Gunther, his sisters Susan Gunther, Mary Gunther and Patty (John) Beaumont, his grandchildren Donicio Navares, Xzile Navares, Naphaila Manzanares, Zahryan Jacob Manzanares, Marcos Silva-Gunther II, Cyrus Silva-Gunther, Taylor Benton, Miah Benton, Anaela Benton, Paulina Benton, Felizia Rael, Ceciliana Rael, Delfino Rael, Jaleia Chavez, Jalissa Vigil and Ilijah Vigil as well as many nieces and nephews and family that he loved very much and who loved him.
He is preceded in death by his parents Anne and Willard H. Gunther, his girlfriend Gail Medina whom he loved very much

Cremation was chosen and a Recitation of the Rosary will be held on Friday February 7th at 7:00 pm at the Iglesia de San Francisco de Assisi Catholic Church, 23587 C Rd J.2 El Rito, CO 81152. A Memorial Mass will be held the following day at the same Church at 12:30 P.M. A reception will follow Mass at the San Luis Parish Hall.
Read Less

We encourage you to share your most beloved memories of Steven here, so that the family and other loved ones can always see it. You can upload cherished photographs, or share your favorite stories, and can even comment on those shared by others. 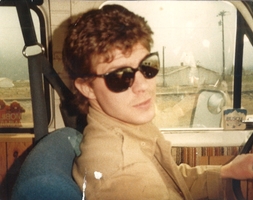