To share your memory on the wall of Stephen Goldstein, sign in using one of the following options:

Print
Stephen Goldstein, age 72, died peacefully at home with his daughter, Korry, holding his hand. He was faithfully cared for by his partner, Rita Roberts and his daughter Korry Goldstein.

Stephen was born February 15, 1947 in New York Ci... Read More
Stephen Goldstein, age 72, died peacefully at home with his daughter, Korry, holding his hand. He was faithfully cared for by his partner, Rita Roberts and his daughter Korry Goldstein.

Stephen was born February 15, 1947 in New York City to Sylvia and Murray Goldstein. He grew up in the Lower East Side of Manhattan.

Stephen moved permanently to Alamosa in 1981. He brought his daughter Korry, age three years old. He quickly became a fixture in the San Luis Valley community. He had a entrepreneurial spirit and created and held many jobs. One of the jobs for which he will be fondly remembered is bringing New York style hotdogs to Alamosa and selling them from a vintage hotdog cart. Stephen founded and owned Blue Moon Bay Painting Company for over twenty years. Some of his best work can be seen on the Masonic building on Main Street, Alamosa. Through his painting business he came to know people far and near. Stephen worked as a counselor at the Mental Health Center in the mid 1980s. He was especially effective with youth in conflict. Many of the young men with whom he worked still remember the kindness, empathy, genuine love and support he provided.

Stephen was predeceased by his parents, an older brother Sheldon, and his trusty canine sidekick, Tucker.

Stephen is survived by his daughter, Korry, his current partner of 15 years, Rita Roberts. Trish Cunningham, Korry’s mother, his son Justin Collins (Tina), his grandchildren Layla and Aiden, Joseph Roberts, Rita’s son, his cousin Sherry Tischler and her husband Stanley, who was his best friend, the Brinkhaus boys who he helped to parent for over nine years, and many, many friends.

Stephen was famous for his charisma, generosity, wit, exuberance, and a laugh that could light up a room, all of which will be greatly missed.

Stephen’s memorial service will be held at Society Hall in Alamosa on Saturday, December 21st, at 1p.m. A reception will follow in the dining area of the nearby Presbyterian Church.

In lieu of flowers, donations can be made to Rio Grande Headwaters Land Trust - P.O Box 444 Del Norte Colorado, 81132, in memory of Stephen to preserve the San Luis Valley, a place in which he felt the landscape and the people fed his spirit through all the years he lived here.

Receive notifications about information and event scheduling for Stephen

We encourage you to share your most beloved memories of Stephen here, so that the family and other loved ones can always see it. You can upload cherished photographs, or share your favorite stories, and can even comment on those shared by others.

Posted Dec 16, 2019 at 09:10pm
Steve was always so energetic and excited about something. His smile and laughter was always with him. His love of cars got us together. We helped restore his 63 1/2 Galaxy he was so excited. Always a happy guy when we saw him and bringing his latest car by for us to see. Our heartfelt condolences to his family. He will be sadly missed.
Comment Share
Share via:
M

Posted Dec 14, 2019 at 01:07pm
May this tree planted in Steve Goldstein’s honor grow strong and reach for the stars, as Steve did.

Posted Dec 14, 2019 at 12:16pm
Steve is one of the greatest. I met him years ago when I worked for Coca Cola and he was part of the Purple Pig back then. We have been friends ever since. I always looked forward to his infectious smile and spirit. You are gone from this life brother but not forgotten. My love always. Woody
Comment Share
Share via:
LM

Posted Dec 14, 2019 at 02:02am
I remember when he came into the Valley Food Co-op, excited that he had found a Cabbage Patch doll at the hardware store down the hall. They were a bit scarce. He wanted help wrapping it. Well that was not a service we did, but how could I refuse?! He was so persuasive...that kind of joy could not be refused! I think it was Christmas Eve. He was so happy about that doll for Korry. My sympathy to all of his family. Loretta Mitson 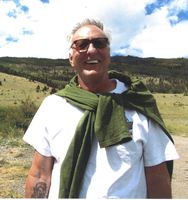