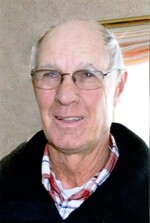 Sherrill E. Mix was born December 12, 1938 in Alamosa to Willard and Ora Mix. He always said he knew from the time he was four years old that he wanted to be a farmer. Sherrill loved all animals, the work in the fields and the smell of the earth after a rain. There was never a bad day, even the wind didn’t bother him, it was part of Gods world.

He was a well-respected man and served on many company boards. Some of which were: The Monte Vista Co-op, the ASC (FSA) committee, SLV Research board. CPAC, NPC, for many years as a financial director. He was a quiet person adding to a conversation when he thought it necessary. For many years he raised club lambs for 4-H members, sending many lambs to Utah, New Mexico, and Texas. Top honors were won by the kids and taught them a sense of responsibility. Sherrill started out being a member of FFA advancing to the state level. Then 4-H. He attended CSU and Fort Lewis College and while he was in college, he decided to shorten the spelling of his name to Sherrel. He then returned home to farm.

He loved representing the potato growers of the SLV and the NPC level for 28 years. He was able to visit with other area growers and become good friends with many. Sherrill was a member of the Center Kiwanis Club, and loved being with his friends and serving pancakes and sausage to many people. He was also a member of the Center Methodist Church and an avid bowler. He bowled three times a week with his friends. He and Linda traveled many places, but liked to be in the mountains and on his farm best of all.

Sherrill is preceded in death by his parents, a brother Rodney, and two brothers-in-law and a sister-in-law and many special friends. He is survived by his wife Linda, a daughter Michelle, a son Roger (Rosalie) and four fantastic grandchildren. Ryan (Allison) Mix, Brandon Rogers, Michael Mix and Bailey Rogers, a nephew Tom Mix, and a brother Gary Mix. He attended all sporting and school events of his children and grandchildren, cheering for them as a proud grandpa.

Sherrill left this world due to complications of Parkinson’s Lewy Body Dementia on January 7, 2021 at the Rio Grande Hospital. Cremation has been chosen and a Memorial will be held at a later date. Contributions are suggested to the Center Kiwanis or the Center United Methodist Church in his memory.

Rogers Family Mortuary is in care of the arrangements. To extend condolences, tributes and words of comfort for Sherrill’s family, please visit www.RogersFunerals.com