To share your memory on the wall of Richard Johnson, sign in using one of the following options:

He is survived by his cousin Val Hobson of Mancos, CO; his best friend who he considered his brother since they were 3 years old, Doug McLellan of Las Vegas, NV; uncles Ed Miller of Albuquerque, NM and David Hite of Tucson, AZ; along with other cousins, extended family and friends.

Receive notifications about information and event scheduling for Richard

Posted Mar 13, 2020 at 12:39pm
To the Johnson Family and Friends, I was so sorry to hear about Richard's passing. It is hard losing a loved one at any age. Sincerely, Carol (Ortiz) Redding
Comment Share
Share via: 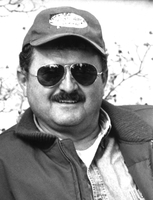