In Memory of
Randy Mellott
1951 - 2017
Click above to light a memorial candle.
Memorial Candle Tribute From
Rogers Family Mortuary, Inc.
"We are honored to provide this Book of Memories to the family."
View full message >>>
Memorial Candle Tribute From
Karen McCallister Hipsher
"Randy and I were classmates all of our school years. I have fond memories of his"
View full message >>>
Plant a Tree In Memory of Your Loved One
Click Here
Menu

In the event that there is an error
in the information presented,
please contact the funeral
home by clicking here. 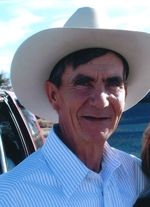 He was born on April 27, 1951 in Del Norte, Colorado to Jake and Marie Freel Mellott. Randy had fond memories of his childhood. He loved to tell stories of adventures with his dad Jake, brother, Joe and childhood friend Ron Ary. They competed in rodeo together, with Randy winning the Little Britches National and World championships in Bareback Riding in 1964, and the CPRA Championship in Bull Riding in the ‘70s. Randy married the love of his life, Wendy Wild, on June 6th 1970. They raised their two sons on a ranch outside Del Norte, raising mules and horses. Life was full of one adventure after another. As the years went by the family grew with grandkids, and extended family that he loved unconditionally. Randy worked in the Creede mine for over 20 years, and then ventured out on his own with Mellott Construction, a venture which included wilderness trail and ditch construction, explosives, dirt and rock excavation. He also built lodge pole pine furniture. He lived his life to the fullest with a heart and determination rarely seen. He will be sadly missed by everyone who knew him.

Randy is survived by his wife of 47 years, Wendy Mellott, his son, Ronnie (Tatum) Mellott, his grandchildren, Dawson (Megan) Mellott and Kollin (DJ) Mellott, his brother, Joe (Darlene) Mellott, numerous nieces and nephews, including Jake (Jill) Mellott and Shala (Marcus) Pacheco as well as his extended family and many friends.

He was preceded in death by his parents, his son Danny Mellott, sister, Sarah Ann Mellott, brother, Bill Mellott and his nephew Todd Mellott.

Cremation was selected and a memorial service is scheduled for 11:00 a.m. today December 20, 2017 at the Gateway Church in Del Norte. Contributions are suggested to Hospice Del Valle or to St. Judes Childrens Hospital and may be made in care of the funeral home office.

Provide comfort for the family by planting a tree in memory of Randy Mellott, please visit our Heartfelt Sympathies Store.