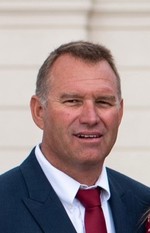 Manassa—Perry “Poops” Sowards, age 49, returned to our Heavenly Father on September 26, 2019. Loved by many and a stranger to no one, the return to our Father in Heaven was likely a huge party attended by his Grandparents Bill and Margaret Rogers, Dorothy and Shelton Sowards, and certainly involved a welcoming hug from his big brother Steven Sowards and prickly kisses to his nephews Taggert Mortensen and Neeko Sowards. Hours and hours were likely spent with Perry telling stories of his life here on Earth. Stories involving the many vacations to Florida he took with his beautiful wife Danette (Bond) Sowards whom he married on February 12, 1993 in the The Church of Jesus Christ of Latter-Day Saints Denver Temple, cheering The Centauri Falcons and his sons Dylan (Mckenzie), Juanito (Jaycee) Romero, Dustyn, Joshua, and Jace, and how the models of today couldn’t hold a candle to the beauty of his daughters Paige and Paityn.

He likely shared stories of his parents Jim and Mary Ann Sowards of Manassa, his siblings Annette (Bret) Durfee, James (Melanie) Sowards, Martin (Lorna) Sowards, Steven (Liz) Sowards, Mandy (Doug) Mortensen, Melissa (Rusty) Howsmon, Shane (Jenny) Sowards, Clint (Alisha) Sowards, and his many nieces and nephews who are all over the world. Many of his stories would have included his best friend Denny Fringer and the hours they spent hunting, working with fish, and getting into trouble as teenagers. He likely reminded those in attendance of the love he had for his wife’s parents Dan and Janet Bond and their children Brent (Lauren) Bond, Bart (Krista) Bond, and Jennifer (Mark) Jackson as they all treated him as one of their own. One could bet he shared stories of his mission in Pittsburgh, Pennsylvania for The Church of Jesus Christ of Latter-Day Saints, his hunting trip to Africa, and all the time he spent remodeling the Box Cars with his friend Mervin Fisher. Surely, he shared stories of working as a lineman- first at Moon Lake Electricity of Rangely, REC of Monte Vista, and finally at Xcel Energy of Alamosa. This welcoming party held in his honor would have extended late into the night, which was unusual for parties held at Perry’s house as he was always jokingly telling people to “Get the heck out and take your kids with you!” at 8pm. We hope that he reminded those on the other side the difficulties of the physical body and how much better he feels to be free from his.

The stories not shared on the other side are those stories of Perry that we will forever hold in our hearts here on earth. Stories of how loving and helpful he was to everyone he met, and the impact he had on people even after only a few minutes of meeting them. Stories of what a hard worker Perry was, always doing something. Stories of how he loved to be up at the cabins with his family and friends. Stories of how much he loved his wife Danette and how much fun he had harassing her like husbands do. There are many stories that we all have of Perry, and we are saddened that the time to make more has been cut short.

One final story telling session will be held at 11 am on Friday, October 4th, 2019 at The Church of Jesus Christ of Latter-Day Saints in Manassa with visitations being held on Thursday, October 3rd from 6 to 8pm and again on Friday, October 4th from 10 to 10:45am in the same location. If you have a personal memory of how Perry touched your life, that you would like to share with his family, please email it to storiesofperry@gmail.com so we can cherish it forever. A “Perry Sowards Memorial Fund” has been set up at San Luis Valley Federal Bank in Alamosa.

Rogers Family Mortuary is in care of the arrangements. To leave online condolences, tributes and remarks for Perry’s family, please visit www.RogersFunerals.com