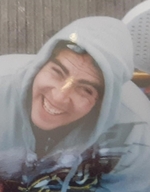 Nick Sandoval, 41 died Tuesday, November 17, 2020 unexpectedly in a car accident. His emblazoning presence in the lives of those who knew him began on January 3, 1979 in Bitburg, Germany.

Many saw Nick as invincible, a force to be reckoned with. Nick lived a life that not many others would have been able to keep up with, he was wild, funny, strong, intimidating but surprisingly caring and was always willing to help someone out whenever needed. Nick’s life was cars and his kids and the two intertwined entirely and he absolutely shared his love for cars and passed that on to especially his youngest daughter.

Nick attended Alamosa High School where he was one of the star athletes on the football team and assisted in their epic state semifinal season. He also broke and still currently holds the record for the 100 meter dash during track at 11.1 seconds and graduated in 1998. He then went on to attend Wyoming Tech and graduated from there in 1999. He worked doing what he loved as an Auto Body tech and was an accomplished painter and was known as one of the best around, which led to one of his greatest accomplishments of making it into a classic car magazine for one of his paint jobs and that was something he was extremely proud of. Nick spent the majority of his career at Absolute Shine where he was able to pass his knowledge of cars and his work to many throughout the years and through all of those individuals his legend will live on through their work.

His legacy lives on through his children Vanesa 21, Danica 14, Delaney 9, and Destin 8 as well as his fidus Achates Amber Cortez. His parents Becky (Nimon Malouff) Mondragon and Jake Sandoval, brothers Ryan Sandoval and Eric Mondragon and sister Heather Sandoval (Ryan Tolbert) as well as nieces Alysa, Kylie, Embry and nephew Conner and numerous other relatives.

Cremation was chosen and a Private family celebration of life will be held at a later date. In lieu of flowers, contributions can be made towards a fund set up for his children at the San Luis Valley Federal Bank.

Rogers Family Mortuary is in care of the arrangements. For online words of comfort, remembrances and to leave condolences, please visit www.RogersFunerals.com