To share your memory on the wall of Merle Orr, sign in using one of the following options:

Merle M. Orr left this earth on the afternoon of June 16 at Evergreen Nursing Home. She was born on January 7, 1927, in Alamosa to Mural J. "Bud" Nissen and Helen Fackler Nissen.

She spent most of her life in Alamosa with the exception of some time in San Francisco during World War II. The days spent in San Francisco were some of Merle's best memories. She returned home and graduated from Alamosa High School in 1945. It was during that time in high school that she first laid eyes on a young athlete and student named Spud Orr. The two were married on March 16, 1946, a union that lasted 58 years until his death in 2004.

Two children were born to this union; a son, Lawrence G. "Hoot" Orr, and a daughter, Rebecca.

In the early 80's, both she and her husband retired and began spending the winters in Mesa, Arizona, and the rest of the year in Alamosa. Those were happy, relaxing days for both.

She was preceded in death by her parents, her husband, Lawrence E. "Spud" Orr, and her son, Lawrence G. "Hoot" Orr.

Cremation has been chosen, and a graveside service will be held at a later date.

In lieu of flowers, contributions may be made to the Lawrence E. "Spud" Orr Scholarship Fund at Adams State University.
Read Less

Receive notifications about information and event scheduling for Merle

We encourage you to share your most beloved memories of Merle here, so that the family and other loved ones can always see it. You can upload cherished photographs, or share your favorite stories, and can even comment on those shared by others.

Posted Jun 20, 2020 at 02:59pm
My you RIP you have been a blessing to many. Let them be blessed in their time of sorrow.
Comment Share
Share via:
C

Posted Jun 20, 2020 at 06:05am
Oh my dear friend. MERLIE MAE. It was sooo time for you to go, but it's sooo hard to turn loose of such a precious friend of more than 50 years. It's comforting to know that "Spuddie" and "Hootie" were anxiously awaiting your arrival, "Mrs. Orr."
Precious and few are friendships like we had with the "Orr House." We worked together, played together, ate together, drank a little beer together, laughed, cried, celebrated, admired and respected each other. It was a life of bliss with a few blisters!
Call some of that fate, or could it have been God's plan? Whatever it was. It was wonderful! Everyone should be so lucky.
I wish you fields of gardenias, pans of delicious cabbage rolls, a warm heart full of love and QVC!
Thanks for the memories, Merlie. I miss you already and you're hardly even gone!
Connie, aka Koonie Loonie, aka Fannie Fondue
Comment Share
Share via: 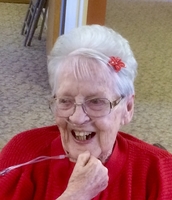