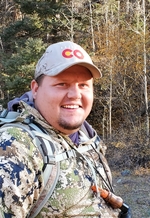 Longtime Conejos resident Mark Edward Sowards, 31, passed away on December 13, 2020. He was born on September 14, 1989 in La Jara, Colorado to Ed and Dana (DePriest) Sowards. Mark graduated from Centauri High School in 2008. On February 27, 2010 he married his high school sweetheart, Tori King. They were sealed for time and all eternity in the Albuquerque temple. Soon after, they welcomed their four kids, Rylie, Mckayla, Kinsley, and Maddek, who mean the world to them. He loved his family above all. He was a caring, nurturing father and husband, who enjoyed spending time with and teaching his children. Mark spent most of his life working with his family at the family store where he made many friends in the community. For the past few years, he has enjoyed working at Robins Construction. He served his community as a firefighter. Mark was a friend to everyone and an avid outdoorsman. He had a passion for teaching and took great pride in guiding people and teaching them his love for the outdoors. Mark was a storyteller, who could entertain anyone. His smile was always the center of the room.

He was preceded in death by his grandfathers, Bill Sowards and Wayne S. DePriest.

A graveside service will be held at 1:00 pm on Friday, December 18, 2020 at the Fox Creek Cemetery. Contributions are suggested to Mark and Tori Sowards and may be made at San Luis Valley Federal Bank or sent in care of the funeral home office.

Rogers Family Mortuary of Alamosa is in care of the arrangements. To leave online condolences or words of strength for the family, please visit www.RogersFunerals.com.