To share your memory on the wall of Marilyn Perry, sign in using one of the following options:

Print
Marilyn Perry, passed away in Longmont, Colorado on Monday, the 15th of June, 2020 after a lengthy battle with the repercussions of brain surgery.

Marilyn was born on the 1st of May, 1947, in Melbourne, Derbyshire, England. Marilyn was ... Read More
Marilyn Perry, passed away in Longmont, Colorado on Monday, the 15th of June, 2020 after a lengthy battle with the repercussions of brain surgery.

Marilyn was born on the 1st of May, 1947, in Melbourne, Derbyshire, England. Marilyn was the only child of Winifred (Winnie) and Herbert Edwin Harris. As a young woman, Marilyn worked as an artisan painter of fine bone china at Royal Crown Derby in Derbyshire. While still living in England, Marilyn married Clifford Heath. Marilyn and Clifford lost an infant son Ian, but later welcomed their daughter Wendy in 1973. For a time, Marilyn worked in vegetable production as well as working on the farm. In 1988, Marilyn married Roger Perry, and they welcomed their daughter Laura.

In 1993, Marilyn, Roger, Wendy and Laura emigrated to the United States to a farm near Princeton, Missouri. Then in 1997, Marilyn, Roger, Wendy and Laura moved to the San Luis Valley to the Parma Ranch in Monte Vista, Colorado. Marilyn’s love was her sheep and her dogs. She had a commercial flock of sheep, raised and trained Border Collies to work with the sheep as well as Great Pyrenees to guard the sheep. Marilyn loved country life. She was an avid reader with a very sharp mind. Marilyn loved music and loved to sing show tunes, always humming happily is how she’ll be remembered.

Receive notifications about information and event scheduling for Marilyn

We encourage you to share your most beloved memories of Marilyn here, so that the family and other loved ones can always see it. You can upload cherished photographs, or share your favorite stories, and can even comment on those shared by others.

Plant a Tree in Memory of Marilyn
Plant a tree 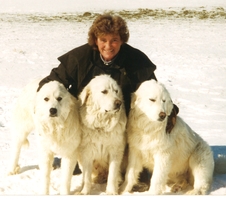