In Memory of
Loretta Lacell
Harris (Claunch)
1938 - 2017
Click above to light a memorial candle.
Memorial Candle Tribute From
Rogers Family Mortuary, Inc.
"We are honored to provide this Book of Memories to the family."
View full message >>>
Plant a Tree In Memory of Your Loved One
Click Here
Menu

In the event that there is an error
in the information presented,
please contact the funeral
home by clicking here. 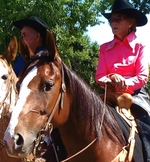 In Loretta’s younger years she was a very talented barrel racer. She won many races throughout her career but some of the ones that stood out the most was winning the Pancake Race as well as being awarded the International Traveling Griddle.

After she and Gene were married, they moved to Arizona, and then to Kansas to continue their farming. They eventually ended up back in Colorado and made it their permanent home. Loretta’s enjoyed passing time in her yard and garden. She would spend hours weeding her flower beds and putting her green thumb to work growing beautiful flowers of every color and variety.

If you would like to leave an online condolence or tribute for the family please visit Loretta’s obituary at www.RogersFunerals.com

Provide comfort for the family by planting a tree in memory of Loretta Lacell Harris (Claunch), please visit our Heartfelt Sympathies Store.