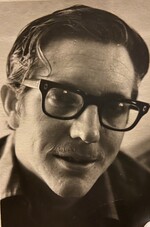 Leslie S. Porter Jr. of Alamosa Colorado passed away on March 16, 2021 at
Parkview Hospital in Pueblo.

Leslie was born on August 11, 1946 in Hammond, Indiana. Son of the late Leslie S. Porter Sr. and Marie Iola Porter. Les graduated from La Jara High School in 1964 and attended Adams State prior to being recruited by The United States Department of Interior where he was an Earth Scientist. He was employed for 36 years before his retirement in 2001.

Leslie is survived by his wife of 49 years. He was married to Mary Chisum Porter of Uvalde, Texas on July 09, 1971 in Gillette, Wyoming. Also his brother Robert Porter and wife Melinda, of Silver City, New Mexico. Sister JoAnna Stiverson and husband Doug of Wheatridge, Colorado.

Leslie is preceded in death by his parents, also a niece Heather Porter and a nephew Aaron Porter.

Cremation was selected and private services will be held at a later time. To express condolences, please visit www.rogersfunerals.com