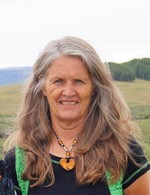 Karen Jane Johnson passed away on September 6, 2019 in her home in La Jara, Colorado at the age of 67. She was born July 2, 1952 to Wayne and Helen Shawcroft in Alamosa, Colorado.

Karen was preceded in death by her father, Wayne, her horses King and Souvenir, and her dog Wrenches.

Karen grew up on a farm where she learned to work and learned to raise and love animals. Her first love was horses She barrel raced in high school with one of her favorite horses King. She attended BYU, where she received her bachelor's degree in accounting. She then returned home and worked at the A&W her parents owned and started dating Scott. They were married and sealed in the Manti, Utah temple on August 2, 1977. They rented a house for a short time in Monte Vista, CO. They then lived in the “pink house” near Star for a few years until they were able to build their own home on land they purchased from her grandparents in La Jara. There she raised her family and taught them how to work and how to play. Whether in work or play, she always ensured everyone was included. She enjoyed life--from water fights to board games to cookouts in the mountains. She liked to garden and especially looked forward to harvesting peas and tomatoes. One of her favorite foods was watermelon. There were very few summer days without it.

Her family meant the world to her and her 17 grandchildren kept her very busy. She looked forward to every visit, baking contest, horseback ride and picnic in the mountains. Wherever Grammy went, her grandkids weren’t far behind.

She loved her Savior, Jesus Christ, and never failed to recognize His hand in her life and in the lives of those around her. She served in many different callings in the church and always did her best, whether she was serving as Relief Society president or as a nursery leader.

A Funeral Service will be held 11:00 a.m. Thursday, September 12, 2019 at the La Jara First Ward of the Church of Jesus Christ of Latter-day Saints. Interment will follow services in the Sanford Cemetery.

Rogers Family Mortuary is in care of the arrangements. To express online condolences, tributes and remarks for Karen’s family, please visit www.RogersFunerals.com