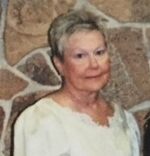 Judy attended school in Topeka, Kansas. She was proud to be one of the first classes to graduate from Eisenhower Junior High and following that, she graduated from Highland Park High School. Following her graduation, she worked for a few years at a local hospital as a medical assistant as well as helping with new staff orientation. When the Hospital closed down, she took on her next role as a Environmental Technician for the Kansas Department of Health and Environment. In 2000 the two retired and moved to South Fork that September. In her younger years, she was a member of the Jobs Daughters and later in her life, she was a member of the Eastern Star Bethlehem Chapter in Monte Vista. Judy enjoyed cooking, had a passion for animals and above all cherished her time spent with Larry traveling and exploring all the beauty around us.
She is survived by her husband Larry R. Heersink, her children, Jeffrey Scott (Stephanie) Heersink and Craig Alan (Lisa) Heersink as well as her grandchildren, Kaitlyn Nicole Heersink, Taylor Ryan Heersink and one brother Gary Lee Downing, as well as numerous extended family.

She was preceded in death by her parents.

Cremation was selected and a Memorial service will be held at a later time. Contributions in her memory are suggested to the South Fork Fire Rescue and the Rio Grande Hospital and may be made in care of the funeral home office.

Rogers Family Mortuary in Monte Vista is in care of the arrangements. To express condolences or words of comfort to the family, please visit www.rogersfunerals.com