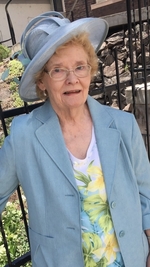 Judy was born on September 11th 1940 in Lamar Colorado, to Donald and Irene Burnett. Judy was the delight of her parents and the treasure of her Aunt Alma. She was a musical prodigy at a young age and many said she had the voice of an Angel. She fell in love with Jerry Rodgers in her late twenties. Hopelessly in love. His wit and charm and humor swept her off her feet. They married in May of 1970 and she then joined Jerry in Monte where he had established Rodgers and Sharp Mortuary. Shortly after they were married, they were blessed with 2 beautiful boys, Chris and Kevin. They were her pride and joy. Just 9 years after they were married Jerry passed away and Judy found herself raising 2 wild boys. She was strong and all they needed. She showered them with unconditional love. Above all else Judy was a devote follower of Christ. She relied on her faith and God’s guidance. She was not destined to be alone forever. She met Jim Bradley in 1985 and once again gave her heart to another. Jim had 4 boys that she loved as her own, Edward, Paul, David and Mike. Jim and Judy enjoyed a beautiful life together in the San Luis Valley. They were faithful members of the Monte Vista United Methodist Church. Judy was a member of The Order of The Eastern Star and PEO. She passed away surrounded by her boys. She was admired by many and loved by all.

She is preceded in death by her parents Donald and Irene Burnett; her first husband Jerry Rodgers; her aunts Alma Eckles and Lola Alexander; her niece Marilyn Alexander.

Judy loved flowers and she also loved the local fire department. If you would like you can make a donation in her memory to the Monte Vista Fire Department.

Rogers Family Mortuary of Alamosa is in care of the arrangements. To leave online condolences or words of strength for the family, please visit www.RogersFunerals.com