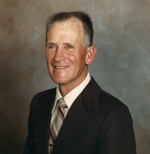 Longtime valley resident Joseph Lee Goodge, 92, passed away on September 6, 2019. He was born on January 16, 1927 to Baylor Sanders Goodge and Irene Hicks Goodge in Fox Creek, Conejos, Colorado. Joe was one of 6 children, his mother died when he was nine days old. Following her death, he was taken in by his mother’s sister and her husband W.M. and Maggie Mae Darnall. In 1929 the Darnall’s sold their ranch in Fox Creek and moved to a ranch south west of Romeo in the Track City area, where Joseph grew up. He loved farming, ranching and being outdoors. When he was six years old, one of his aunts passed away and the Darnall’s took in one of his cousins, Edith Hicks. Joseph and Edith grew up together and were very close, even attending the same grade at school together. Joseph attended school in Romeo from kindergarten to graduation. He was the Valedictorian of his class in 1945. In April of 1948 he left his home to serve as a Missionary in Argentina until December of 1950. On February 9, 1951 he married LaNella Richardson in the Salt Lake Temple. On April 12, 1951, Joseph was drafted into the United States Army and was stationed at Fort Leonard Wood, Missouri, while stationed there, they were blessed by the birth of their first child, Terry Lee. On April 12, 1953, Joseph was honorably discharged from the Army and the family moved back to Colorado. Upon his return home, Joseph went to work for E. Shundler Perlite Company and he worked there until 1982. He also worked as a seasonal worker for the United States Forest Service on trail maintenance, until he finally decided to just spend the rest of his life taking care of his own yard, cutting wood and other chores around his home.

Joseph was a member of the Church of Jesus Christ of Latter-Day Saints and had held many callings in the Stakes, Wards and Branches in which he resided. He truly loved his Church and all the members in it. He never met a stranger, every new person he met was his friend for life and he was blessed with many. He enjoyed going with Jim Horton, all over, playing music. He played guitar and Jim played the fiddle. Joseph loved his family and was very proud of each and every one of them. He often considered himself the luckiest guy in the world.

A funeral service will be held at 11:00 am on Thursday September 12, 2019 at the Fox Creek Branch of te Church of Jesus Christ of Latter-Day Saints. A visitation will be held from 6:00 pm to 8:00 pm on Wednesday September 11, 2019 at the Rogers Family Mortuary in Manassa and prior to the service at the church on Thursday from 9:30 am to 10:45 am. Interment will follow services in the Fox Creek Cemetery. In lieu of flowers, contributions are suggested to the Fox Creek Missionary Fund and may be made in care of the funeral home office. To express condolences, please visit www.rogersfunerals.com

Rogers Family Mortuary in Alamosa is in care of the arrangements..