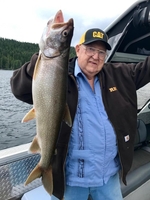 John Allen Schofield, 82 of Del Norte, Colorado passed away at Rio Grande Hospital on January 10, 2021 with his daughter Mona, nearby. He was born August 16, 1938 in Cotopaxi, Colorado to Cecil Schofield and Mary Shawcroft.

John was a long-time employee and part owner of Davis Engineering, Inc., retiring at age 62 to continue consulting occasionally for the company. His work for Davis Engineering began at the young age of 15 with a summer job under the tutelage of the owner, Paul Davis.

He lettered in football, then graduated from Del Norte High School in 1956, and attended the Colorado School of Mines in Golden, Colorado.

John loved school sports and continually supported his home team, traveling to games to cheer the Tigers on. He followed collegiate and professional sports as well, and could converse at length about how the Broncos or the BYU Cougars were playing.

As a devoted lifetime member of the Church of Jesus Christ of Latter Day Saints (LDS), he served his church in many capacities including full time church missionary. He was instrumental in getting an LDS chapel built in Del Norte. He held many positions of leadership- among them Branch President, High Priest Group Leader, and Sunday School President.

John enjoyed many activities and hobbies; collecting arrowheads, hunting, fishing, and roaming the mountains. All these interests were passed along to his children and grandchildren, who cherish the memories of those experiences with him.

He married his sweetheart, Sharon M. Bagnell on December 23, 1961 in Salt Lake City Utah for time and all eternity.

Always the loving and caring family patriarch, John is survived by his children- Mark Schofield, Keith Schofield, and Mona Sanchez; their spouses, Angela Schofield and Mike Sanchez; 12 grandchildren; and 8 great- grandchildren. His kind, polite, and loving nature set an example of compassion and caring for all who met him.

He is preceded in death by his parents, siblings, his wife Sharon, and his sons Russell and David.
The family asks that flowers be sent to Rogers Family Mortuary, 404 Morris St., Monte Vista, CO 81144.

The funeral service will be held on Saturday, January 16, 2021 beginning at 2pm at the Rio Grande LDS Chapel at 909 Prospect Avenue, Monte Vista, CO 81144

Rogers Family Mortuary is in care of the arrangements. To leave online condolences, words of strength and comfort or remembrances, please visit www.RogersFunerals.com