To share your memory on the wall of Jerry Schmidt, sign in using one of the following options:

Jerry met her husband Louis Schmidt at a rodeo in Fort Morgan, Colorado where Louis was competing in the calf roping division. They married on April 17, 1955 in Fort Morgan where they spent their first 2 years as a family. Jerry and Louis then moved to Brush for a short while before settling on a wonderful ranch 20 miles East of Walsenburg, called Turkey Ridge. In 1973 the family moved back to Brush, Colorado and made their final move in 1976 to the San Luis Valley.

Jerry and Louis enjoyed taking care of Jerry’s younger sisters during their summer breaks. Many wonderful memories were made during those summers. Jerry always had a huge heart and so much love for them, as they did for her. Not only did all her sisters love her dearly, their husbands loved her too! In the final months of her life, many of Jerry’s sisters stood by and took care of her 24 hours a day. Their laughter brightened her soul and kept her happy right to the end.

Louis and Jerry had four children while living in Walsenburg; Minda Witt 1960, J.D. Schmidt 1962, Beth Sipes 1964 and Larry Schmidt 1965. Jerry raised her kids with joy and love. They miss her deeply and will cherish wonderful, lifelong memories of their mother.

Jerry’s greatest joy was being an amazing partner to Louis Schmidt and a loving mother to her four children. She was a wonderful ranch wife, not only taking care of the home, but running the operations of the ranch. Jerry also participated in the outdoor chores including running the swather and cutting many acres of alfalfa hay as well as taking care of many sheep, cattle and horses.

Aside from helping run the ranch, Jerry worked for The Monte Vista Journal selling advertising during the 1980’s and 1990’s. She enjoyed her job and built a strong community with all the people she met. She thoughtfully made meals for anyone in distress. She always had food on hand to prepare a casserole, jello salad (orange with mandarin oranges or lime with pears), a vegetable and a cake. Many people were touched by her thoughtfulness when life was not kind.

The Schmidt family attended church at the Church of Christ in all the communities they lived in. Jerry was well loved by all at Central Church of Christ from 1976 until 2020. She is famous for making her homemade cream cheese mints for weddings, baby showers and other church get-togethers.

Jerry is preceded in death by her parents, her daughter Minda Witt and grandson John Schmidt. Jerry and Louis were devastated by the early loss of John and Minda. They were both extremely compassionate and generous people. She is survived by her husband Louis, her sons J.D. (Carla) of Monte Vista, Larry (Audrey) of La Jara and daughter Beth (Les) of Berthoud; 13 grandchildren and 20 great-grandchildren. She is also survived by her sisters, Ginger Lee, Judy Moomey, Dee Barnes, Ethel Nugent, Libby Barnes, Debby Sawyer and Rhonda Attaway. She is also survived by her dear sister-in-law Helen Tormohlen. Jerry leaves many nieces, nephews, cousins and an abundance of dear friends.

We encourage you to share your most beloved memories of Jerry here, so that the family and other loved ones can always see it. You can upload cherished photographs, or share your favorite stories, and can even comment on those shared by others.

Posted Mar 06, 2020 at 09:22am
Our sincere sympathy to the family of Jerry Schmidt. We didn't know her personally, but, knew of her through her family, and, that she was a person we would have liked to have known. May you all be blessed and comforted with the wonderful memories of her love and care.
Bob and Harriet DeFreece

Posted Mar 04, 2020 at 07:36pm
Jerry always had such a very pleasant upbeat way about her. I always enjoyed hearing her cheery voice on the phone when I would call about BLM matters and running into her and her family with their sheep on the public lands. I remember visiting with her one day for about an hour at her home and afterward I felt so happy and fulfilled. She was one of a kind and I will miss her.
Comment Share
Share via:
SM

Posted Mar 04, 2020 at 02:07pm
I was saddened to hear of the passing of your wife & mother. She was a wonderful, sweet woman! Heaven has gained a new angel! May our Heavenly Father bless you and your family with comfort & sweet memories of your time with her.
Comment Share
Share via: 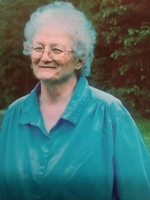