To share your memory on the wall of James Shawcroft, sign in using one of the following options:

Provide comfort for the family of James Shawcroft with a meaningful gesture of sympathy.

James was married in 1958 and from that marriage came three children Brenda McBride, Kelli (Kelly) McGinnis both of Manassa, and Brett J. aka Charlie (Tanna ) Shawcroft of La Jara.

James married Carla Rae Gilleland on June 13, 1975 in the Manti Utah Temple. Together they raised their children Kristin (Angelo) Valdez of Pueblo West, Bart (Stephanie) Shawcroft of La Jara, Nathan (Kathleen) Shawcroft and Candace (Steven) Johnson both of Manassa. James was blessed with 29 grandchildren and 25 great grandchildren. James’ children and grandchildren were his greatest accomplishments. James always treasured the visits he received from his family and when they got ready to leave his standard remark would be “Leaving already? You just got here”.

James was known by many for his honesty, hard work ethic, generosity, and sense of humor especially while working on the farm, hunting and fishing with his sons. He has left a void that will never be filled. His memory will be cherished always by his family. Until we meet again.

A visitation will be held on Monday, August 19, 2019 from 6:00 P.M. to 8:00 P.M. at Rogers Family Mortuary in Manassa, Colorado. A second visitation will be held on Tuesday, August 20, 2019 from 9:30 A.M. to 10:45 A.M. in the primary room of the Manassa First Ward building of The Church of Jesus Christ of Latter day Saints. A funeral service will follow at 11:00 A.M. also at the church. Interment will follow services at the Manassa-Romeo Cemetery. In lieu of flowers the family has asked for donations to be made to the ward missionary fund, or to a charity of their choice in honor of James.

Rogers Family Mortuary of Manassa is in care of arrangements. If you would like to leave online condolences or tributes for the family please visit James’s obituary at www.RogersFunerals.com
Read Less

Posted Aug 23, 2019 at 02:13pm
I was heartbroken to hear of Mr. Shawcroft's passing. He was always such a sweet, nice gentle man. We have all the family in our prayers. May our Heavenly Father send the comforter and may you all always have sweet memories of him.
Comment Share
Share via:
JN

Posted Aug 17, 2019 at 03:52pm
Carla, my heart goes out to you, you are a very strong woman and have been thru so much and Heavenly Father has blessed you and will continue to do so. You have great memories with James and a very special family that will always be there for you. Take care and thank you for being such a wonderful life long friend. Love ya much Jennice Nance Quintana & Jasper
Comment Share
Share via:
AW

Posted Aug 17, 2019 at 01:02pm
I am so sad to hear of James passing. Being first cousins, I have known and looked up to James from my early childhood years. It was a privilege to work on the railroad in Alamosa and Durango with him. I loved it when I could be on the same crew with James. He was a fun guy to be around. I send my sincere condolences to all my Shawcroft cousins and to Jame’s children and Grandchildren and especially to Carla.
Comment Share
Share via:
LL

Posted Aug 17, 2019 at 12:45am
Uncle James. I remember one winter we spent Christmas at grandma shawcrofts house. Rode snowmachines on the fields by the house....oops! James came home from work and we were on his spring crop fields. I was so scared, and he was mad, but he didn't disown us. When dad was fixing up the alamosa house he let dad use his truck for months.....that meant me too and im not sure if he knew I was part of the deal....im sure he had to replace the clutch or even the whole transmission when he finally got that blue truck back. But he never complained, just laughed. One time he came fishing in Valdez with us. The man wouldn't let go of the fishing pole!!! I thought my dad was crazy over fishing...but I met his match that trip! I'll never forget him reeling up those halibut! Fun memories of uncle Jim. Lezlie (Shawcroft) Laird
Comment Share
Share via: 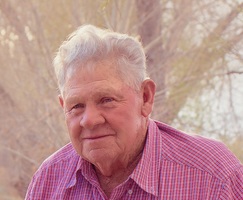