To share your memory on the wall of James Ford, sign in using one of the following options:

After serving in the military, he attended Adams State College obtaining an MA in education utilizing his GI Bill as well as working several jobs. His first teaching position was in Cope, Colorado where he also coached 6-man football, which was a learning experience for someone who played 11-man football. He went on to teach in La Veta, Colorado which brought them closer to their families. After teaching for seven more years and several summer odd jobs later, Jim moved the family back to the Center area where he was able to resume his first love, farming.

While raising four daughters, Judi, Jean, Joanne and Jolene and one son, James, the five J’s (totally his idea), Jim and Nellie still found time to enjoy belonging to several local clubs, bowing leagues and the Sans-Souci Dance Club. They also belonged to the High Country 4-Wheelers Club enjoying the Colorado backcountry mountain passes driving the original Ford Bronco loaded up with kids, coolers and fuel eliciting smiles and laughter from other club members at the pit stops when everyone exited the vehicle. Jim and family also spent many summer week-ends camping and fishing, eventually owning a trailer at Santa Maria which meant no more sleeping in an Army surplus tent that would leak in rainstorms causing the family to be all crammed into the family station wagon for the remainder of the night. After son-in-law, Danny, joined the family farm, Jim and Nellie were able to take a couple of extensive summer and fall trips to Europe, Scandinavia and Russia which provided many treasured memories for Jim which he most recently shared with his Visiting Angels.

After the kids were grown, Jim and Nellie loved spending their winters in Yuma, Arizona where they became friends with other retired farmers. Summer week-ends were often spent in the gambling towns of Colorado and New Mexico, and even after Nellie passed away, Jim would go gambling by himself or with his son, James. Jim also enjoyed spending time with friends and family known as the “Lunch Bunch”. Since he did not like to cook, his photo is on Calvillos Hall of Fame and at KFC they know his name.

Jim was preceded in death by his wife, Nellie, as well as daughters Jean and Jolene.

Having lived 90 years Jim had many stories, homilies, and memories that he loved sharing with any and all who were willing to sit down and spend a few moments with him. He was also a very generous and giving man often helping family, friends and neighbors. One of his favorite organizations that he always donated time and money to was the American Legion Center Post #131. For those wishing to honor Jim’s memory donations may be made to the American Legion Center Post #131 in care of Tom Garcia, 564 Hurt St., Center, CO 81125. To express condolences, please visit www.rogersfunerals.com

There are no events scheduled. You can still show your support by sending flowers directly to the family, or planting a memorial tree in memory of James Marvin Ford.
Plant a Tree

Posted May 20, 2020 at 11:42pm
My condolences to the family of Mr. Ford,
I got to know Mr. Ford while i worked at Oscar’s. He would go every Sunday for his enchiladas and coffee. Sometimes he would go with his daughter Jolene. The day his daughter’s passed, they had gone to Oscar’s and i happened to be the waitress attending them that day. I was so happy to see him when he returned to the restaurant knowing that was the last place he had seen his daughter’s, and he continued to go. When i was moving to El Paso, Texas I had the opportunity to see him on my last day of work. I told him i would no longer be there since i was leaving the valley. After his meal, he left but came back about an hour later just to give me a hug and tell me goodbye. He brought tears to my eyes then, and has brought tears to my eyes now. He was a great man. He will always be in my heart! To the Ford family, you all will always be in my prayers.
God bless you all,
Yvonne Torres
Comment Share
Share via:

Thank you so much Yvonne! I remember my dad telling me that story how he went back and gave you a hug. He always told me that you took good care of him when he ate at Oscar's.
JF

Yvonne, what a lovely story, thank you for sharing! I knew he had many friends that he met during his "lunch" times, whether he ate at Oscar's, KFC, Calvillos or other places. Over the years Pops found it easier to share his caring heart, and I'm so glad you have a happy memory of him to cherish!

Posted May 20, 2020 at 04:28pm
Joanne I am so very sorry for your loss. I didn't know your dad well, but when I did see him, he was always so nice to me and I really enjoyed spending time with him.
Annette
Comment Share
Share via:
JF

Thank you Annette, he touched many lives over the years and I'm glad yours is one of them.
L

Posted May 17, 2020 at 11:42pm
Hi,
I remember a lot about your Dad when I was young. Joanne and I have been friends since 2nd grade. So, I recognize a lot of the pictures in the albums. Your Dad and Mom was so gracious when anybody came to the house. I remember spending a lot of time at lunch time or dinner time at the house. I was over there quite often. We had a fun with a lot of laughter. I also helped with the harvest and we had a fun time at that time too. What I remember the most is that Jim had to have coffee at lunch no matter if it was 80 to 90 derees out, he had to have his coffee. I am sure he still did during his last days. I will miss him . He always had a smile on his face no matter what the circumstances was. I have all of you in my thoughts and prayers and will think of him often.
Comment Share
Share via:
JF

Very kind words, Lori, thank you for sharing. And yes, he remained a coffee drinker almost right to the very end...at least for breakfast and lunch!

Thank you Lori for the kind words. Yes he loved his coffee and always was kind and polite to everyone. Even the last few days he never complained and told everyone that he loved them. 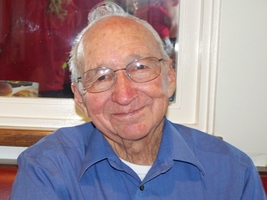