To share your memory on the wall of Harold Ziegler, sign in using one of the following options:

Harold was born in Alamosa, Colorado to Frank and Mabel Anderson Ziegler on July 12, 1932. He married Elaine White in Alamosa on February 11, 1956. They enjoyed more than 45 years together until her death in 2002.

Harold loved working as a Farmer and Rancher and enjoyed every aspect, especially his cows. He was active in water resources for the San Luis Valley and was instrumental in his assistance with the Closed Basin Project. He was named Water Manager of the year for Division III of the Colorado Division of Water Resources, served on the Commonwealth Irrigation Company Board for 31 years, and as president for 15 years, served on the Colorado Water and Power Authority, received the Outstanding Young Farmer Award through the United States Jaycees, and was baptized in and a lifelong member of the Alamosa Presbyterian Church. Harold also served on the Mosca/Hooper Fire Board. He developed many new friendships throughout his years serving the community on the various boards and ventures he participated in.

Harold’s grandchildren were the highlight of his life. He never knew a stranger and often struck up a conversation with whomever he came in contact with, whether he knew them or not. In his spare time, he enjoyed playing cards.

He is preceded in death by his parents, his infant children Venda and Darrell Ziegler, his wife Elaine, his sister Mary Ellen Lanzone, his brothers Aaron Ziegler and Delmer Ziegler.

A Funeral Service will be held 10:00 a.m. Monday, August 10, 2020 at the Living Water Bible Fellowship in Alamosa. Interment with military honors will be follow services in the Alamosa Cemetery. Contributions are suggested in his memory to Children’s Hospital Colorado at: https://secure.childrenscoloradofoundation.org/site/Donation2?df_id=1660&1660.donation=form1&utm_source=hospital&utm_medium=donatepage

Rogers Family Mortuary is in care of the arrangements. To leave online words of strength, remarks and condolences for Harold’s family, please visit www.RogersFunerals.com
Read Less

Receive notifications about information and event scheduling for Harold

Donations are being accepted for: CHILDRENS HOSPITAL COLORADO FOUNDATION.

We encourage you to share your most beloved memories of Harold here, so that the family and other loved ones can always see it. You can upload cherished photographs, or share your favorite stories, and can even comment on those shared by others.

Posted Aug 10, 2020 at 11:47pm
I was so sorry to hear of your loss. I’ve know Harold for many years when I worked with the Water Court. He was always very nice and quite kind. He loved his family. He will be missed. Sincerely, Carol Redding
Comment Share
Share via:
BD

Posted Aug 10, 2020 at 10:30am
Our sincere sympathy to Harold's family. We spent many a happy time with Harold and Elaine in activities with the Cattlemen and
in supporting our children when they played in the accordion band and other events. Also had a special time when he came to have roast beef and play cards with us. He was a very special gentleman and will be greatly missed. Bob and Harriet DeFreece
Comment Share
Share via:
SA

Posted Aug 10, 2020 at 10:04am
Rusty and I fondly remember Harold from the time when I was interim pastor in Alamosa. He was always encouraging and willing to lend a hand. I enjoyed his pride in Sara as I officiated at her wedding. God be with all of you in the family as you miss him.
Pastor Sara Armstrong
Comment Share
Share via:

Posted Aug 07, 2020 at 05:19pm
Such an amazing man, our family enjoyed visiting him and his family and still talk about our trips out there. We always had fun playing cards, getting tours of the ranch, learning the history of the area, farming information, etc. My husband has always had the utmost respect for him and his work ethics. He will missed by many.

Posted Aug 07, 2020 at 01:08pm
Uncle Harold always had time for us children. I remember him calling us to go work in the fields or herd sheep. He would sing while we worked....🎵 Remember the Red River Valley🎼
was one of his favorites. Another memory....the adults all sitting in the house drinking coffee and Uncle Harold out on the lawn playing with us kids.....him taking the tractor to the pond by Grandma's, clearing the snow, starting a fire so we kids could ice skate all day. He never made us feel we were in the way. He was one of a kind.
Shirley Ziegler Cox
Forest, Va
Comment Share
Share via: 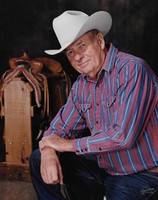