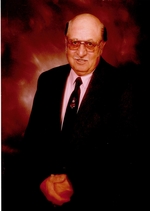 Harold’s life began on September 22, 1929 in Mesita, Colorado, the first son of Phillip and Beulah Yount Lentz. He married the love of his life, Shirley Jean Isaacson, on October 23, 1949 in Taos, New Mexico. They enjoyed almost 71 years of marriage together.

Harold worked as a farmer and later owned and operated his construction company. In his later years he ran a snowplowing business well into his late 80’s.

Harold and Shirley enjoyed many years of camping and jeeping in the Colorado mountains. They enjoyed dancing at the Wagon Wheel in La Jara for many years, playing Bridge with friends, spending winters in warm parts of the country in their RV and living life to the fullest.

Harold is survived by his loving wife Shirley Lentz of Monte Vista; his daughter Sharon (Kenneth James) Phillips of Muskogee, OK; his grandchildren Duane Garrett and Virginia Lentz; his brother David (Sharon) Lentz of Prescott, AZ and his sister Phyllis May of Tucson, AZ; as well as several nieces, nephews and extended family members.

Cremation was chosen and services will be held in the Spring of 2021.

Rogers Family Mortuary is in care of the arrangements. To leave online condolence, words of comfort and remarks for Harold’s family, please visit www.RogersFunerals.com