To share your memory on the wall of George Merkey, sign in using one of the following options:

He was preceded in death by his parents.

Cremation was selected and a memorial service will be held at 10:00 am on Saturday, March 7, 2020 at the Presbyterian Church in Monte Vista. In lieu of flowers, contributions are suggested to the charity of your choice in memory of Bob. To express condolences, please visit www.rogersfunerals.com
Rogers Family Mortuary in Monte Vista is in care of the arrangements.
Read Less

We encourage you to share your most beloved memories of George here, so that the family and other loved ones can always see it. You can upload cherished photographs, or share your favorite stories, and can even comment on those shared by others.

Posted Feb 25, 2020 at 12:31pm
Dear Grace and Family
I am so sorry to hear of Bob's passing.
May you find comfort in this time of sorrow.
God be with you.
Love and Prayers
Connie Hull, Victor, NY
Comment Share
Share via:
VB

Posted Feb 24, 2020 at 05:28pm
We are sorry to hear of the passing of Bob, but we know that he is not suffering and is happy where he is now. I bet he isn't wasting any time sharing his stories. Bob was a happy go-lucky guy that liked to tell stories to get a laugh or two. He loved to have a garden, so a lot of his time had to be spent with a hoe or rake in his hands. We usually heard about what all was getting canned from those gardens. Not having a garden, and remembering the days when we did have, brought back how good those vegetables tasted! We mainly got to see him and Grace at our cousin reunions.
Our Love and Prayers,
Virginia and Leon Breckenridge 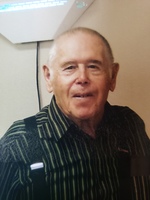