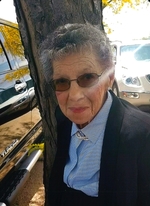 Genevieve Garcia Maestas, 91, of San Pablo, Colorado passed away on July 4, 2019. She was born on September 26, 1927 to Felix Garcia and Maclovia Salazar She married Ralph Rafael Maestas on September 6, 1953 . He proceeded her in death on July 18, 2014, Genevieve had four children: Theresa (Charles) Chavez of Blanca, CO, Phyllus Maestas of San Pablo, CO, Raphael (Rae Jean) Maestas of San Pablo and Kristie (Marco) Celada of Broomfield, CO. She is also survived by her grandchildren and great grandchildren.

Genevieve was a long time resident of San Pablo. She did graduate from Sierra Grande High School. Genevieve went on to get her teaching license and taught English at the schools in both El Rito and Chama. She later taught at Mercy High School in San Luis and eventually at Centennial District R-1.

She enjoyed crocheting, embroidering, reading, learning and traveling. Genevieve was a life long Catholic and enjoyed learning and studying theology. She attended the Formation II classes so she could support others of her faith. Genevieve also loved spending time with her family.
Genevieve is survived by one sibling Viola(Luther) Medina of Fort Garland CO
A rosary will be held at the Catholic church in San Luis on Sunday, July 7, 2019 at 7:00 p The funeral mass will be held the following day, Monday July 8, 2019 , at 10:00 a.m. also at the Catholic church with burial in San Isidro Cemetery in Los Fuertes CO .
Rogers Family Mortuary of Alamsoa is in care of arrangementsz to leave online condolences for Genevieve please visit rogersfunerals.com