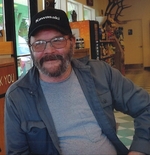 October 1, 1951 Lorin & Jahaza Patterson welcomed their third child Gary Lee Patterson into their growing family. He enjoyed a blissful childhood being raised in the L.D.S church with his brothers and sisters.
Gary was blessed to learn the construction trade from his father, he could run any piece of equipment, it was said he was so talented he could pick your teeth with a backhoe. He lived most of his life in different parts of Idaho. After a whirlwind romance he married Aleesha Lee, they had a beautiful daughter Wendy Ray Patterson. They were later divorced, but remained good friends. Gary had a great love of the outdoors, he enjoyed deep sea fishing on the Oregon Coast, he also was an avid hunter, he often joked he was born 100 years too late. If there was a bear within a 50 mile radius it would find Gary Patterson, hence the nickname “Grizz”. He was a gifted storyteller, he would tell people his stories with a whiz, and a bang sometimes removing his stocking cap so he could turn it into a makeshift puppet. If you have ever read Patrick F. McManus you would swear he had followed Gary around and made a living telling the stories of his life in the outdoors. Gary was a talented craftsman, he could design and build whatever he set his mind to. He moved to Colorado in 2006 to be closer to his daughter and to be “Papa Gary” to his grandchildren. He had a zest for life and this describes him to a “T”

Life’s journey is not to arrive at the grave safely in a well preserved body, but rather to skid in sideways, shouting, “Holy Sh!!… what a ride!”. He was preceded in death by his father Lorin Patterson, numerous aunts and uncles and his beloved niece, Heidi. He is survived by his mother Jahaza, his siblings Paula, Bill, June, Pat and Ron, his daughter Wendy, her husband Kevin, grandchildren Kody and Wyatt. The family would like to thank the E.M.T.’s & emergency room staff at Rio Grande hospital in Del Norte for their heroic efforts. Services will be held at a later date.

Rogers Family Mortuary is in care of the arrangements. To leave words of strength, a good memory or condolences for Gary’s family, please visit www.RogersFunerals.com