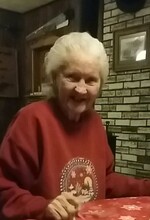 Center resident Esther Margaret Carlson, 86, passed away on November 30, 2020. She was born on January 1, 1934 in Castle Rock, Colorado to Louis and Mildred Anderson. She married William M. “Bill” Carlson on August 5, 1950 in Manitou Springs, Colorado. Esther’s passion was in being a school bus driver, she drove for the Douglas County and Center School District’s for over 25 years. She had a love for seeing the children everyday. She loved to hunt and hike in the hills with her husband as well as collecting antiques and going to farm sales. Esther was a true ranchers wife, she worked hard and at the end of the day still had the patience and heart to care for her families needs.

Esther is survived by her husband of 70years, William “Bill” Carlson of Center, her children, Christine (Lee) Willis of Franktown, Colorado, Steven (Treva) Carlson of Saguache and Betty Ann Jones of Chugwater, Wyoming, numerous grandchildren and great grand children as well as her siblings Louis “Peewee” (Brenda) Anderson, Dan Anderson and Janet Garrett and many nieces, nephews and extended family.

Sh was preceded in death by her parents and her brothers Raymond Anderson and Ed Anderson.

Cremation was selected and a private family service will be held at a later time. In lieu of flowers, contributions are suggested to the High Valley Mennonite Church and may be made in care of the funeral home office. To express condolences, please visit www.rogersfunerals.com