To share your memory on the wall of Donald Knapp, sign in using one of the following options:

Provide comfort for the family of Donald Knapp with a meaningful gesture of sympathy.

Don was the only child of Rupert L. and Ethel L. White Knapp and was born in the Bowen Community, south of Monte Vista on November 23, 1921. He married Adelaide E. Baldwin at the Centenary Methodist Church on October 3, 1942 in St. Louis, Missouri.

Following graduation from High School and during a couple years at Adams State College, Don worked in the Grove and Rialto Theatres in Alamosa and also for the El Raton and Shula Theatres in Raton, New Mexico. He then enlisted in the United States Army Air Corps and served during World War II. Following his time in the military, Don took a position with the Colorado Department of Highways and spent more than 30 years, retiring as Resident Engineer. Don owned and operated his own businesses Blanca Vista Corporation and Knapp Engineering and Surveying Services for many years.

Don loved to fly fish and camp under the stars. He and Adelaide enjoyed square dancing all throughout the Valley and Don volunteered for many dances as the caller. Don’s knowledge of the history of the San Luis Valley was immense, especially when it came to surveying. He had keen powers of observation and always noticed something new.

Don is preceded in death by his parents, his wife Adelaide in 2008, his son-in-law K R. Dalby and his grandson-in-law Gerald “Tommy” Archuleta.

A visitation will be held from 12:00-1:00p.m. Monday, February 3, 2020 followed by a funeral service at 1:00 p.m. at the Rogers Family Mortuary, 205 State Avenue in Alamosa. Interment will follow services in the San Luis Valley Cemetery in Monte Vista, Colorado. Contributions in his memory are suggested in lieu of flowers to the Honor Flight of Southern Colorado, at www.honorflightsoco.us or checks through Rogers Family Mortuary.

Rogers Family Mortuary is in care of the arrangements. To leave words of comfort and remarks for Don’s family, please visit www.RogersFunerals.com
Read Less

Receive notifications about information and event scheduling for Donald

We encourage you to share your most beloved memories of Donald here, so that the family and other loved ones can always see it. You can upload cherished photographs, or share your favorite stories, and can even comment on those shared by others.

Posted Mar 13, 2020 at 12:41pm
To the Knapp Family and Friends,
I was sorry to hear about Don's passing. It is hard losing a loved on at any age. Sincerely, Carol (Ortiz) Redding
Comment Share
Share via: 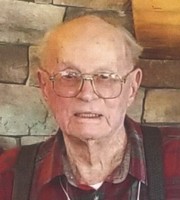