To share your memory on the wall of Curtis Chavez, sign in using one of the following options:

Provide comfort for the family of Curtis Chavez with a meaningful gesture of sympathy.

He was preceded in death by his grandparents and his cousin Ryan Maestas.

Cremation was selected and a Rosary Service will be held at 7:00 pm on Friday, February 14, 2020 at the Sangre de Cristo Parish in San Luis. A Memorial Service will be held at 10:00 am on Saturday, February 15, 2020 also at the Church. Burial of ashes will follow services in the San Isidro Cemetery. A meal will follow at the Blanca Community Center.

We encourage you to share your most beloved memories of Curtis here, so that the family and other loved ones can always see it. You can upload cherished photographs, or share your favorite stories, and can even comment on those shared by others.

Posted Feb 13, 2020 at 02:43pm
Ms. Chavez, may you and your family find your way gracefully during this time. I am so sorry for your loss. Michelle D.
Comment Share
Share via:
PC

Posted Feb 12, 2020 at 03:30pm
Charles and Theresa, I am so sorry for your heartbreaking loss. My deepest condolences to you and the family. Blessings ,Peace and Love. Your cousin Pearl Chavez
Comment Share
Share via:
E

Posted Feb 12, 2020 at 01:55pm
Our heart goes out to the family during this trying time. Words cannot Express how we feel prayers, hugs kisses and lots of love to all of you 💔💔
Comment Share
Share via:
CM

Posted Feb 11, 2020 at 01:39pm
Theresa and Charles and family I am so sorry for your loss. My thoughts and prayers are with you during this difficult time. May God give you strength and comfort in the days to come. May you Rest in Peace Curtis.
Comment Share
Share via: 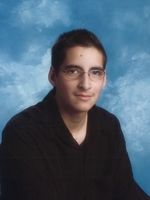