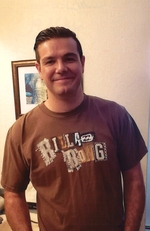 Longtime Alamosa resident Brodrick “Brody” Jeffery Geiser, 34, passed away on November 3, 2020. He was born on March 13, 1986 in Denver, Colorado. Brody graduated from Alamosa High School in 2004.
Following his graduation, he served four years in the United States Navy . Brody served on the USS Essex and was stationed in Sasebo, Japan as a CTR CryptoTech. He earned the Joint Meritorious Service Medal, Navy "E" Ribbon, Good Conduct Medal, National Defense Service Medal, Global War on Terrorism Expeditionary Medal, Global War on Terrorism Service Medal. He was honorably discharged in April of 2008.

Following his service to our country, in 2013 Brody enrolled at Eastern New Mexico University under the G.I. Bill. He was a student-assistant coach with the Greyhound football team and helped win the Lone Star Conference Championship. After leaving Eastern New Mexico, he moved to northern Colorado and spent a couple years working in the area. He was most recently employed at Town and Country Auto Mall in Alamosa in the service department

Brody enjoyed building models, hunting, playing video games and being spoiled by his mother. He spent many years on the sidelines of the Adams State football field as the ball boy with his dad.

Brody had a kind soul and had numerous friends. He was so loved and will be greatly missed.

Cremation was chosen and services will be held at a later time. In lieu of flowers, contributions are suggested to the Adams State University Foundation Brody Geiser Scholarship Fund. To express condolences, please visit www.rogersfunerals.com