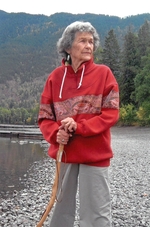 Barbara Jeanne Relyea passed away peacefully surrounded by love on September 28, 2019. Barbara, who just celebrated her 96th birthday, was born in Lewistown, Illinois, to Frank E. and Esther E. Lilly. She married Abram J. Relyea in 1950 and they had 4 children, Jim, Sandra, Linda, and Scott. They met in New York, lived for a time in Illinois and settled in Colorado.

After graduating from high school, Barbara attended Western Illinois on a full-ride scholarship for two years then suspended her college education to begin working as a secretary at Camp Ellis, an army training camp. One summer, between semesters at Western Illinois, Barbara worked in Winslow, Arizona, in one of the Fred Harvey Hotels, serving meals to troops who came through on the train.

After WWII ended, Barbara finished her BA from Colorado State University and later earned her master’s degree from Adams State University. She taught home economics at the Alamosa Junior High School for over three decades and was one of the surviving members of the AJHS Group W. During that time, she earned Teacher of the Year in Conservation and Home Economics Teacher of the Year. In 2012, she was in the first class inducted into the Adams State Educators Hall of Fame. Barbara was ahead of her time, her teaching pedagogy included many hands-on activities and events to stimulate her students and prepare them for adult life. She established Job Days and organized an outdoor classroom experience in which students spent three days at Beaver Creek Youth Camp. She ran a little restaurant out of the Home Economics Department for a week and planned a career-day for all 3 grades of the Alamosa Junior High School called “A Fair of the Heart.” She was a 4-H leader and Future Homemakers of America leader.

Barbara loved outdoor activities including hunting, camping, hiking, and riding horses. She was an accomplished seamstress and made clothes for herself and many of her family members including making wedding dresses for both daughters and her granddaughter.

The immediate family appreciates the care and attention The Bridge showed their mom, her home for the last five years, especially in the last month of Barbara’s life when the staff went above and beyond to make her comfortable.

A Memorial Service is planned for 2 p.m. Tuesday, Oct. 8, at the First United Methodist Church in Alamosa. In lieu of flowers, the family asks that donations be made to the Hospice del Valle or The Nature Conservancy in Colorado.