To share your memory on the wall of Adelmo Chacon, sign in using one of the following options:

Adelmo was born on February 5, 1941 in Romeo, Colorado to Encarnacion and Cleotilde DeHerrera Chacon. He married Josie Cordova on July 24, 1995 in San Luis, Colorado.

Adelmo worked as a Rancher for many years and owned Demos Lounge in Romeo, Colorado. He started a band called “Los Originales” and he enjoyed writing, playing music, gambling, fishing and just being outdoors.

He is preceded in death by his parents, his sisters Eufelia (Salomon) Garcia, Mary (Bertie) Martinez, Benita (Humberto) Garcia and one brother Orlando (Tina) Chacon.

Receive notifications about information and event scheduling for Adelmo

We encourage you to share your most beloved memories of Adelmo here, so that the family and other loved ones can always see it. You can upload cherished photographs, or share your favorite stories, and can even comment on those shared by others.

Plant a Tree in Memory of Adelmo
Plant a tree 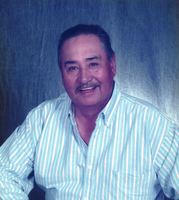