To share your memory on the wall of John Kelly, sign in using one of the following options:

Provide comfort for the family of John Kelly with a meaningful gesture of sympathy.

Print
John William Kelly, 85 passed away peacefully, to return to his Heavenly Father , at his home at the Bridge in Alamosa, CO on October 24, 2019.

John was born on November 14th, 1933 in Alamosa, Colorado to Horace and Joan Kelly. He was r... Read More
John William Kelly, 85 passed away peacefully, to return to his Heavenly Father , at his home at the Bridge in Alamosa, CO on October 24, 2019.

John was born on November 14th, 1933 in Alamosa, Colorado to Horace and Joan Kelly. He was raised in the Carmel farming district with his younger sister Barbara along with numerous cousins. He attended elementary school in a one room school house in Carmel. He graduated from La Jara High School in 1952 and then attended Colorado A & M in Fort Collins, CO and received a degree in agriculture in 1957. He enlisted in the US Navy in 1957 and attended officer training at the naval academy until he was given an honorable medical discharge due to a heart condition.

John was united in Marriage to Virginia Clair Nielson on August 9, 1959 in Romeo, Colorado. They were blessed with 3 children, Kimberly, Brad and Celeste. John was a successful farmer and businessman. People came from far and wide to pick Kelly sweet corn. He was respected in the community and served on many boards including 40 years on the San Luis Valley Federal Bank board. After their children were grown John and Virginia enjoyed splitting their time between their two homes in Mesa, AZ and Alamosa, CO. John enjoyed spending time at his grandkids activities and sporting events. He was an avid fly fisherman; he also enjoyed hunting, camping and playing card games with friends. A very happy day was when he was sealed for time and all eternity to his wife and children on September 27, 2008 in the Albuquerque, NM temple of the Church of Jesus Christ of Latter-day Saints. John will be remembered as have a generous and caring heart, visiting the sick and helping people in need and his resilient fighting spirit.

He was preceded in death by his parents Horace and Joan Kelly, sister and brother-in-law Barbara & Greg Bahr, nephew Steven Bahr, and great nephew Reece Waugh along with numerous Aunts and Uncles.

A funeral service will be held at 11:00 a.m. on Thursday October 31st at the Alamosa Stake Center of The Church of Jesus Christ of Latter Day Saints at 927 Weber Dr. in Alamosa, CO. A visitation will be held from 4 to 6 p.m. on Wednesday October 30th at the Rogers Family Mortuary in Alamosa and prior to the funeral services from 10:00 to 10:45 on Thursday. Interment will follow the services at the La Jara Cemetery. Following the interment everyone is welcome to join the family for a meal at the Church.

In lieu of flowers, donations can be made to the JAM Foundation a 501 C3 charitable organization to support a CARD (Center for Autistic and Related Disorders) in Yuma, CO. The CARD center will support his great grandson Mitchell Armstrong with Autism and other children in North Eastern Colorado. CARD centers support children and adults on the Autistic Spectrum including Fragile X that his son Brad and grandson Tyson have. Donations can be taken to San Luis Valley Federal Bank under the JAM Foundation or mailed to Megan Armstrong at 212 Homestead Trail Yuma, CO 80759.

Rogers Family Mortuary in Alamosa is in the care of arrangements to leave online condolences or words of strength for the family, visit www.RogersFunerals.com.
Read Less

We encourage you to share your most beloved memories of John here, so that the family and other loved ones can always see it. You can upload cherished photographs, or share your favorite stories, and can even comment on those shared by others.

Posted Nov 01, 2019 at 08:33am
So sorry to hear of John's passing. Lots of wonderful memories of John and Virginia while growing up in Carmel. John did lots of service to the community and was a very good farmer. Very nice person and good friend especially to my dad John Schroeder. Lots of interaction also when he served on the Board for the Scandinavian Ditch Company. God Bless Virginia and family at this time. Love from Brett and Smiley (Schroeder) Shawcroft.
Comment Share
Share via:
MO

Posted Oct 28, 2019 at 09:30pm
We were so blessed to be a part of Johnny's life! My husband, Mike, and he were cousins. Living in Carmel we got to spend alot of really special times with him and his family which we will always hold dear to our hearts! So thankful we got to see him this last summer,even tho' it was for just a very short time! His smile was amazing! Our love and hugs and prayers are with you Virginia, Kim, Celeste and Brad. We will see "Peanut" ( as our girls called him) again someday!
Comment Share
Share via: 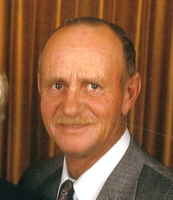